Each participant’s session is acquired by following a roadmap that has been set up with the engineers of the MRI Center. This roadmap defines the set and order of the tasks to be performed from the time the participant is taken over until the data is made available.

Each project has its own roadmap, which must be respected and, if necessary, specified. It is a reference document for each step.

We detail here the general aspects related to the acquisition of MRI data. These acquisitions are included and ordered in a list (protocol) that has been set up with the engineers of the MRI Centre (see figure below). It is this protocol that was selected in the second panel when the subject was registered. 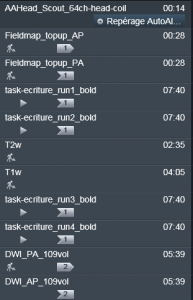 Excerpt from a sample MRI protocol

Once the protocol has been recorded at the console, the user is in front of the next panel: 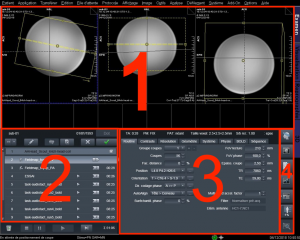 Whatever the final modality(s) of the examination (anatomy, functional, diffusion, quantitative, …) it is necessary to begin the series of acquisitions by a localization scan called localizer. Its purpose is to acquire images that will be used to locate the following acquisitions: launch with the green arrow:

. The images used for positioning will be automatically loaded in the 3 upper tabs (panel 1 in the figure above).

For cerebral type examinations only, and using the 64-channel antenna, this scan is generally called:

( as soon as possible: )Launch FIRMM

These are high spatial resolution images (generally 1mm or even 0.8mm isotopic), used for morphometric studies and for the standardization of functional and diffusion images. The subject has nothing to do but not move, a film can be projected to pass the time (this can even help to reduce the subject’s movements). The orientation of the yellow box (acquisition volume) is automatically determined in relation to the tracking image (see example below): check that the whole head is inside, especially the back of the skull and the tip of the nose. To translate the yellow box, click on the central yellow circle and move the mouse to the desired position while keeping the mouse button pressed.

to launch the sequence when the positioning is correct. 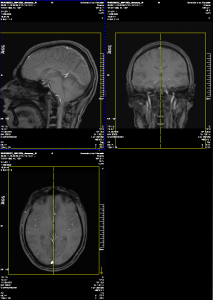 Positioning of the field of view (yellow box) of the anatomical sequences: check the centering in relation to the head and check that the nose and the back of the skull do not stand out of the yellow box.

The magnetic field of the MRI is disturbed by the presence of a body in the tunnel. Automated procedures (“shimming”) are used to compensate for these perturbations but they are imperfect and B0 field inhomogeneities persist, typically at the air-tissue interfaces around the brain.
These field inhomogeneities cause distortions in functional images. To correct these geometrical distortions during the pre-processing steps, it is recommended to acquire a B0 field map. Several methods exist, the choice made at the MRI center is to use a Spin-Echo EPI sequence with AP and PA encoding. In the protocol, these sequences are entitled: Fieldmap_topup_AP and _PA.
They are axial-oblique acquisitions: the orientation is determined automatically with respect to the calosal line of the subject located on the localizer images: The positioning of the field of view (yellow box) and the shim box (green box) will be automatically copied for all the following functional images.

TO DO: Translating the yellow box to cover the brain (click on the central circle to move the box).

Tip: To unzoom the positioning images, click on the right side of the screen to display the toolbar and click on :

The parameterization of the functional sequences was defined upstream by the engineers of the MRI centre during the preparation of the protocol in agreement with the research team and there is nothing more to modify when the scan is launched.
The fMRI sequences are entitled:task-XXXX_runYY_bold.
The scan starts automatically (a few seconds) until the following window appears: 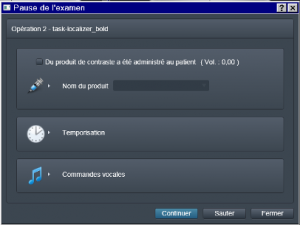 This involves repeated measurements of brain images with a weighting of each image that will be defined by the diffusivity of water molecules in a given direction. The standard protocol proposed by the MRI Centre consists of the repetition of two sequences with opposite phase encoding directions AP and PA. The sequences are entitled DWI_PA_109vol and DWI_AP_109vol: the images are acquired in oblique – axial orientation, along the subject’s calosal line, defined automatically once again on the basis of the location images: Translating the yellow box to encompass the entire brain.

– Communication with the subject :

– Adjusting the position of the table, lights and ventilation from the console

– Verify or change the number of volumes acquired from functional imaging

-Communication with the subject (with the Siemens intercom)

Press the left button to listen to the subject. Do not forget to turn it off before starting the sequences. Press the right button to speak, release it once you have finished your sentence to hear the subject’s answer (similar operation to a walkie-talkie).

-Adjust the position of the table, lights and ventilation from the console.

on the right side of the screen. Settings locked while an image is being captured.

on the right side of the screen to display the toolbar and click on :

– Check or change the number of volumes acquired from functional imaging :

Go to the tab: Contrast > Dynamics and read/modify the number of “Measurements”.